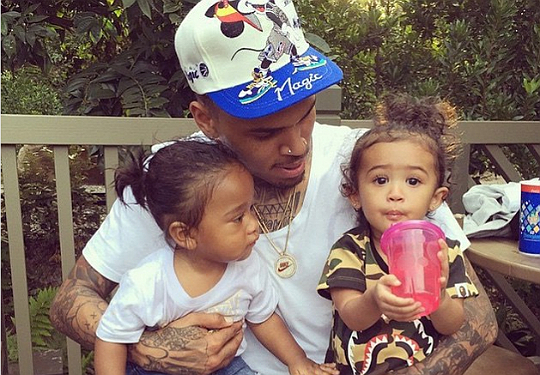 Chris Brown is on daddy duty. The R&B singer was recently photographed while holding his daughter, Royalty , and Omarion’s son, Megaa. “Family first(daddy day wit the homies),” shared the star.

Chris looks adoringly upon his daughter in the picture as she sips on a drink while focusing on the camera. Megaa also appears to be intrigued with Royalty’s activities as he stares at the 1-year-old as well.

Brown is making every effort to be an active parent, which includes filing paternity documents with the courts. According to TMZ,

“Chris Brown has had it with baby mama Nia Guzman’s child support and custody demands, so he’s asking a judge to lay down the law once and for all.

Chris and Nia have been at war over 1-year-old Royalty. She’s demanding $15k a month in child support, way more than Chris says is fair.

We’ve learned Chris just filed legal docs in Houston to establish paternity. That will give him the right to fight Nia over support and custody.”

Although he was not able to be with Royalty on her birthday, Chris had a week-log celebration for his daughter that included a trip to Disneyland and a house party. Royalty received a myriad of gifts at the bash, and thoroughly enjoyed the attractions while at the Happiest Place on Earth with dad, Megaa and his parents.