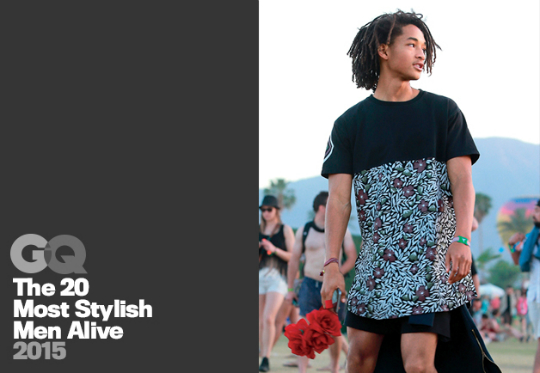 Jaden Smith has mastered the art of fashion, according to GQ magazine. The publication recently deemed him as one of the most stylish men alive. Jaden, who has been featured in costumes and dresses, tells the magazine about his fashion sense.

“First I roll over on the bed I built for myself and look at the ground,” says the star of his routine in the morning. “If there are clothes I wore from the previous day and they’re not too dirty, that’s what I put on.”

Smith has been one to wear animal prints in public. “I think they’re cool and I used to wear them a lot more when I was a little younger,” says the star. “At 13 I used to call myself the king of animal print, because I would wear them almost everyday, but then I became more conscious and realized I didn’t want to be known as someone who wears animal skins only, so I switched to black.”

Although he has encountered criticism for his taste in apparel, which included wearing a Batman costume to Kim and Kanye West’s wedding, Jaden tells GQ that the way that he dresses has everything to do with self-expression. “I’m just expressing how I feel inside,” says the teen. “I like wearing super drapey things so I can feel as though I’m a super hero, but don’t have to necessarily wear super hero costumes everyday.”

Jaden is Jada and Will Smith’s oldest son. The couple have two children together, and Will has three kids in all.