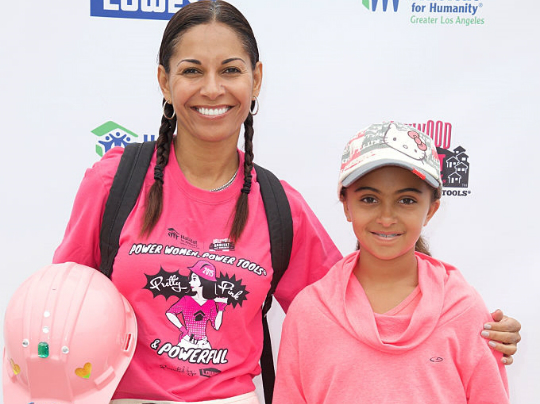 Salli Richardson-Whitfield and her daughter, Parker, were two of many celebrities to attend the ‘Power Women Habitat For Humanity’ event that took place in Inglewood, California, this past weekend. The actress and her daughter wore pink in honor of the event, and Salli even sported the organization’s signature shirt along with a pink construction hat.

Habitat for Humanity has helped thousands in need over the years and continues to foster a spirit of volunteerism with its projects. It was just two years ago that 200 volunteers stopped by Sony Pictures to frame walls that were later used to provide affordable housing in the community.

The mission of Habitat for Humanity is in sync with Salli’s spirit of thinking outside of the box. The actress told media a few years back that she strives to be creative with her career because of her kids. “I still have many goals, dreams, and aspirations that I’m working towards,” said the star. “I have not given up on wanting to win every award there is to offer.”

Salli and husband Dondre Whitfield have two kids, Parker and Dre, together.