Home » NEWS » TV WATCH: RILEY BURRUSS GETS FED UP WITH THE ‘HATERS’ ON ‘KANDI’S SKI TRIP’

TV WATCH: RILEY BURRUSS GETS FED UP WITH THE ‘HATERS’ ON ‘KANDI’S SKI TRIP’ 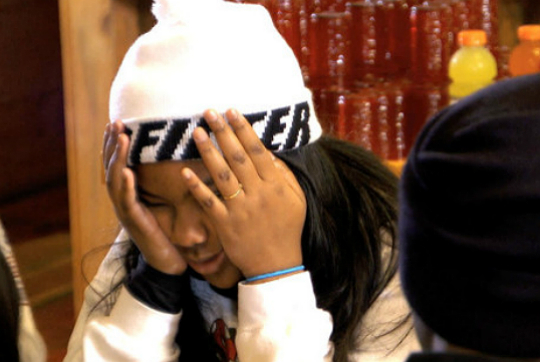 Riley Burruss has little patience for jealousy. the 12-year-old called her mom’s assistants out for being envious of her step-father’s assistant during a recent episode of ‘Kandi’s Ski Trip.’

“Can we stop being so rude? Just stop entertaining this,” said Riley after listening to DonJuan and Carmon berate Matthew for his devotion to Todd Tucker as the producer’s assistant. “It’s annoying,” added the tween. “They’re being sarcastic [saying], ‘Oh yeah, you do your job well.’ But at the same time, they’re suppose to do the same job that he does but he does it better, so they’re like being haters.”

Of course, Carmon and DonJuan had a rebuttal for Riley who was simply speaking her mind. “We don’t do the same job,” said DonJuan. Carmon also responded by telling the tween that she does her job as instructed by Kandi and that Matthew “needs to assist Todd” only.

Just when it appeared the two assistants were ganging up on Riley, Mama Joyce came to the rescue. Watch the hilarious interaction here!