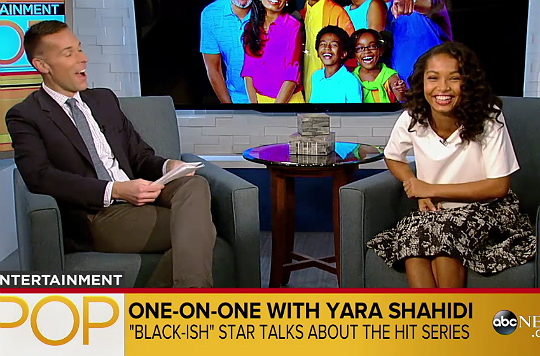 Yara Shahidi may portray the sassy teen on ABC’s hit show ‘Black-ish,’ but she is anything but unruly in reality. The young star tells ABC News that her onscreen character is very different from her real-life personality.

“We’re actually pretty much the opposite,” says Yara. “She is very into social media, and all of that, and I’m the kind of person that has to be reminded to bring their phone places and to call people.” The teen adds, “I use my phone for podcasts and music.” Although she does share updates regarding the show, Yara tells ABC News that “I have to consistently be reminded.”

In addition to talking about her experience on ‘Black-ish,’ Shahidi tells media about her first feature film. “It started with commercials,” shares the actress. “When I got the Imagine That script, I really liked it. I think as a 7-year-old, it was cool to then dive deeper [into acting] than the bite-n-smile commercial kind of thing. It’s like being able to create my own world, [and] it was fascinating to me.”

See what else Yara had to say about her career aspirations and love for corn (yes, we said corn) here.