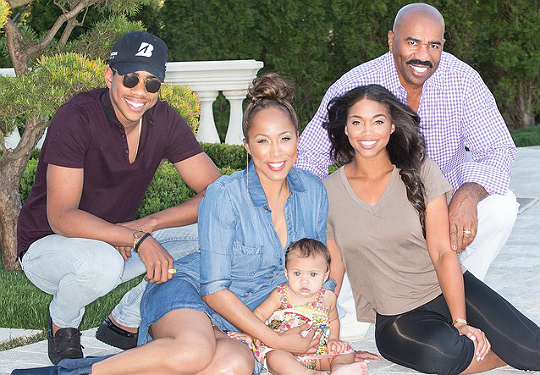 What a cute candid! Steve Harvey poses in a family portrait with his wife and two of their children in the picture. Rose, the Harvey’s granddaughter, is also in the photo and definitely steals the spotlight.

While Wynton and Lori look just as cute in the candid,  Instagram fans couldn’t avoid commenting on the precious look that little Rose gave the camera. “Rose is such a cutie,” said one fan. “Proud grandparents. Love this,” shared another.

Steve is definitely the doting parent who has much to be thankful for. The television host recently shared his story with CBS, in which he discussed his struggles as a comedian that left him homeless for three years during the early stages of his career. “When I look back on it, I couldn’t believe it was three years. ‘Cause I was so intent on getting out. I was working so hard to move forward,” said the star. “I told God if he let me make it, when I got there I’d tell everybody how I did it. I just told Him, ‘If you let me make it, when I get there I’m gonna tell everybody it was you.'”

He has since been doing that and more with the help of his family. The celebrity gives back to his community and searches for ways to impact the next generation through various programs. Steve Harvey has four biological children, and three bonus kids by marriage.