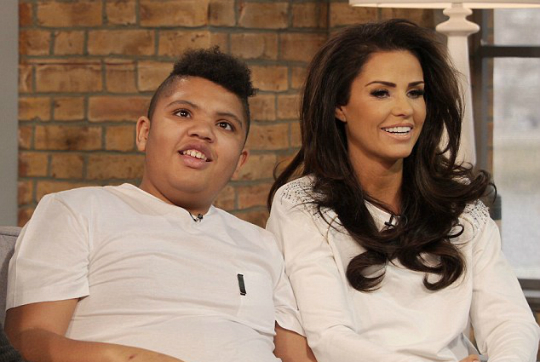 Katie Price is a television personality and model who many know as Jordan. She is also the proud mother of a 12-year-old son, who has a rare condition known as Prader-Willi Syndrome (PWS).

“People say, ‘How do you cope?’ But I don’t know any different,” said Katie during an appearance on ‘This Morning’ earlier this week. The celebrity had her son sitting beside her as she told fans about his daily routine. “He just wants to eat, eat, eat and if we’re not looking he will steal food.” Price continued, “He’s a big boy because of his thyroid and with Prader-Willi everything is about food.”

Prader-Willi Syndrome is a disability that affects several body functions. Children diagnosed can be forced to cope with everything from poor growth to obesity, and may develop Type 2 Diabetes in adult years if not supervised. Since PWS is considered a genetic condition, symptoms of the illness can be seen from infancy. Katie’s son, Harvey, has limited vision and can only walk a few feet without assistance as a result of the disability.

Even with his challenges, Harvey manages to keep his sense of humor. Katie told fans that her son “does play up for mummy sometimes” during her interview on ‘This Morning.’ His response? “Yeah babe.”