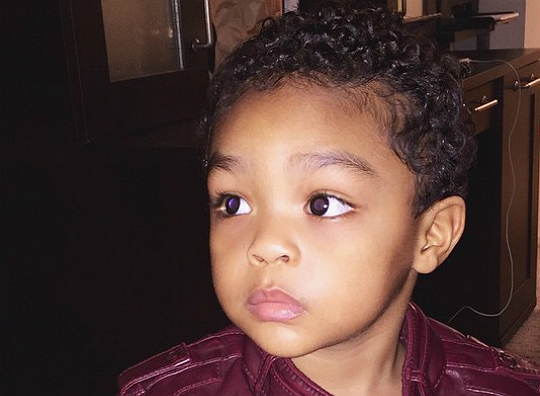 Little Sire may be small in stature but he is every bit of a big baller. The toddler’s father, Curtis “50 Cent” Jackson, recently told media that his youngest son earned a whopping $700,000, for a modeling gig with an audio company.

“He’s got a [modeling] deal now with an audio company,” said the rapper of his son. “They paid him a big payment too, $700K. He’s super cute,” gushed Fiddy. Although $700,000 is more than enough for Sire to pay for college in coming years, 50 Cent told media, “I got to handle that part and let him just have that.”

It’s no surprise that Sire scored his first major modeling gig at the tender age of 2-years-old. Several of the little one’s pictures on Instagram have showed his ability to give the camera a good showing. Sire seems to stand out in all of his photos, regardless of who or what is being captured alongside him. The 2-year-old’s cuteness shines through even while sitting on his famous dad’s shoulders.

Sire is Curtis Jackson’s only child with Daphne Joy. The rapper has two kids in all.

SHAUNIE O'NEAL HAS A NEW PODCAST ON MOTHERHOOD

EXCLUSIVE: 'BLACK-ISH' STAR MARCUS SCRIBNER HAS A CANDID CONVERSATION ABOUT LIFE AS A TEEN STAR AND FUTURE PLANS

EXCLUSIVE: 'BLACK-ISH' STAR MARCUS SCRIBNER HAS A CANDID CONVERSATION ABOUT LIFE AS A TEEN STAR AND FUTURE PLANS