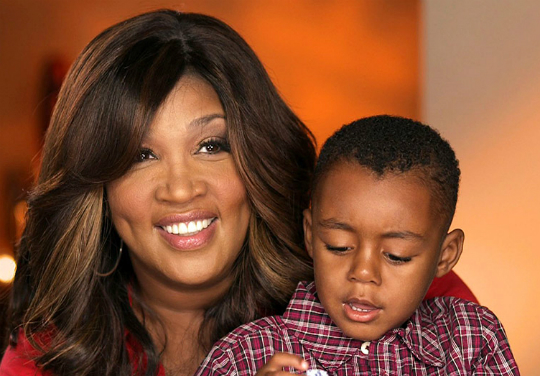 In a very special episode of Raising Whitley, Kym prepared to have her achievements in Hollywood, and at home with her son Joshua, celebrated. The I’m Every Woman ceremony, which took place in July 2014, honored Kym’s journey through motherhood, which has been documented in her groundbreaking TV show.

After watching an emotional video, and finding herself surrounded by the support and praise of all her loved ones, Kym abandoned her speech for something straight from the heart. The actress began by thanking her late mother, whom she pointed out had never had the fortune of receiving such an award, though she (and other mothers) surely deserve it. Next, she thanked her friends, AKA the village, who have also been such an important part of her son’s life.

Through the teary eyes, Kym managed to get a few laughs from the crowd, exposing an extraordinarily real moment of sheer happiness. As if things couldn’t have been better, young Joshua called out to his mother, “I love you!” from his seat.

Joshua, Kym explained, was an unexpected gift that really changed her life.

In 2011, a young woman that Kym had been mentoring gave birth to Joshua and disappeared from the hospital, leaving only Kym’s contact information behind. The actress adopted Joshua, and she and her village have been raising him, ever since.

After the massive success of season one of Raising Whitley, which airs on the Oprah Winfrey Network, the show was expanded to hour long episodes, with season two premiering on January 4. In April of 2013 it was announced that a third season had already been ordered.

Now juggling motherhood and a career in entertainment, Kym has truly proven that she is Every Woman. In 2015 you can also catch her in the second season of the sitcom, Young and Hungry.

Find OWN on TV at www.oprah.com

TV WATCH: MISS D AND THE DANCING DOLLS ARE BACK! BRING IT! 2 PREMIERES THIS JANUARY