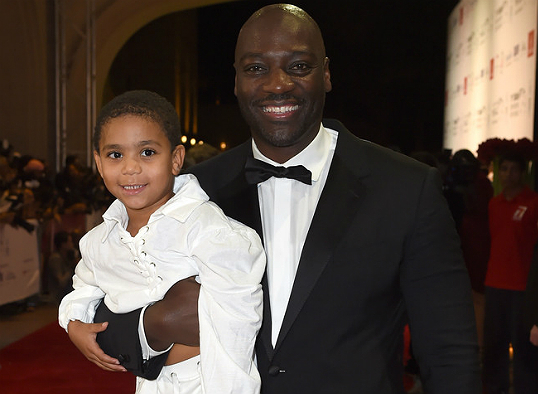 Adewale Akinnuoye-Agbaje and his co-star were two of many celebrities to attend the first day of the 11th Dubai International Film Festival last week.

It was just a few years ago that Adewale asked to be written off the hit series ‘Lost.’ At the time, the actor wanted to return to London to focus on career possibilities as a director.

Apparently those possibilities have rendered positive results as the star had a hand in creating an animated film that made its debut at this year’s Dubai festival. “It’s a traditional Arabic folklore legend that has been forgotten but is being brought to a modern audience in a new and exciting way,” said Adewale of the motion picture. “What you will see next year [when the film makes its public debut] is an animation that is really and truly pushing the bar on many levels. It’s almost as real as it can get without being real.”

Adewale’s film will focus on an ancient slave who lived a challenging life in the Middle East as a descendant of Africa. The little boy pictured will be playing a younger version of Akinnuoye in the animation. See more pictures of the Akinnuoye-Agbaje and his young co-star at the 11th Dubai International Film Festival below!

AMBER SABATHIA IS FAR MORE THAN A 'BASEBALL WIFE'

J.R. SMITH AND DAUGHTER HOST SPECIAL SCREENING OF 'NIGHT AT THE MUSEUM' IN NYC

J.R. SMITH AND DAUGHTER HOST SPECIAL SCREENING OF 'NIGHT AT THE MUSEUM' IN NYC