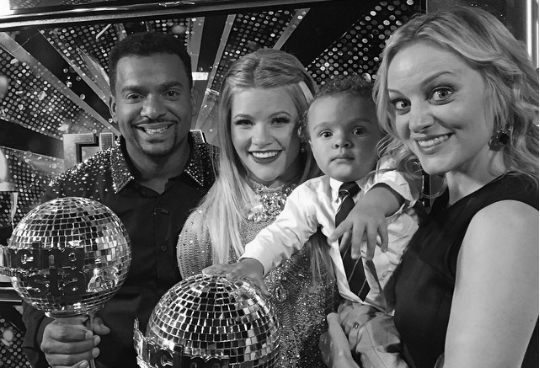 The results came in, and Alfonso Ribeiro along with partner Witney Carson were crowned this season’s ‘Dancing With the Stars’ champions. The actor and professional dancer were brought to tears as hundreds of fans in the studio cheered for them during the final episode of season nineteen.

Carlton took to Twitter to thank the multitudes for their support shortly after winning the coveted trophy. “Thank you so much America for giving @witneycarson and I the Mirrorball,” tweeted the star. “A dream come true. Love you all.”

Alfonso and his partner worked hard all season long to secure a spot in the finals. From the “Carlton” dance to the freestyle performance at last night’s finale, Ribeiro and Carson showed the world that they were two great entertainers.

Little Alfonso Jr. had the distinct pleasure of watching dad claim victory as he and mom, Angela Ribeiro, sat front-and-center during last night’s show. Alfonso has one child with Angela and two kids in all. Catch the actor’s winning dance here. Alfonso and Witney will be headlining the Dancing With the Stars Live! tour that begins in Niagara Falls, New York on December 27, 2014.

'LIVING WITH THE JACKSONS' SLATED FOR 2015

'LIVING WITH THE JACKSONS' SLATED FOR 2015