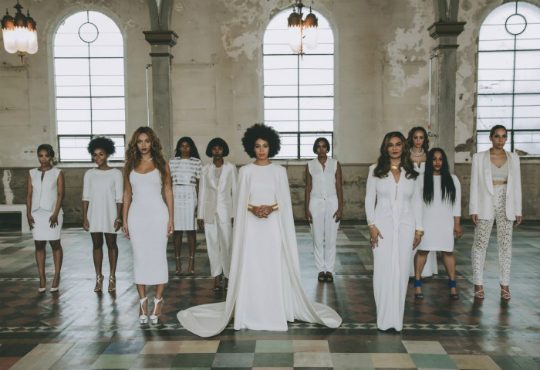 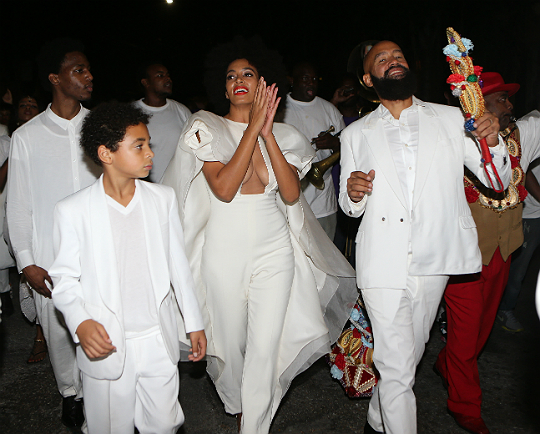 Singer Solange Knowles married her long-time boyfriend Alan Ferguson in front of friends and family in New Orleans, Louisiana on November 16, 2014. After the ceremony, Solange and Alan enjoyed a Mardis Gras style parade with their wedding guests, which included Beyonce, Jay-Z, and their daughter Blue Ivy Carter:

The guests, including Bey and her family, all sported shades of white. The singer and Blue Ivy wore dresses, while Jay Z sported a white suit. The couple beamed as they took photos after the ceremony, while mom Tina Knowles was spotted holding hands with her boyfriend.

Before the wedding, Solange and her beau were spotted riding bicycles, during which several residents congratulated them on their upcoming nuptials, E! News has learned.

Although weddings typically bring about nervousness, Solange and Alan appeared to be free of pre-marital jitters. One onlooker told media that the happy couple were “looked pretty calm, relaxed on their wedding day.”

The pre-wedding festivities kicked off on Friday night. Solange, sporting a gorgeous, modern bridal-style dress, was spotted walking and holding hands with her beau as they headed towards the Indywood Cinema theatre, while Bey was seen entering the building by herself. Guests reportedly watched Mahogany starring Diana Ross.

Solange’s son, Julez, from her previous marriage to Daniel Smith, played a big part of the couple’s special day as well. (Source)

Daniel is Solange’s son from a previous relationship. Check out more pictures of him and cousin Blue Ivy Carter below!