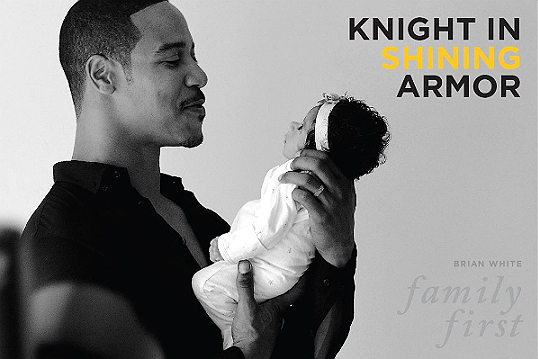 A few months ago we shared behind-the-scenes pictures of Brian White posing with his daughter Layla for Dapper Dads magazine. Now, the feature cover that we have been waiting for is finally here! Dapper Dads released its first family issue a few days ago, and Brian White and baby Layla graced the magazine’s cover.

The actor held his daughter high as she looked at him with loving eyes. Layla was so small in the pictures that she could be held by one of Brian’s hands. Adorable!

In addition to taking pictures for the magazine’s cover, Brian spoke with the media source about the joys of parenting. “The biggest responsibility of being a parent is getting in touch with your inner self, and letting yourself know that that this little person from the day that they are born is going to put their eyes and ears on my spouse and I,” shared the star. “They are going to try and emulate us, especially the words we do not want them to say. Kids are going to do things that you do not want! It always ends up like that.”

White also commented on his and wife Paula Da Silva’s first child being a girl and not a boy. “We tried for a little bit, and then after a while I realized that I did not care about the sex of the baby and I was ready for what God wanted me to have,” explained the star. “I just wanted to continue to learn and grow and become the man I am supposed to become, and the father that I am supposed to be. Then all of sudden we had this little miracle and I would not change this for the world.”

YARA SHAHIDI HAS LEARNED THAT "SUCCESS COMES FORM BEING PASSIONATE"

YARA SHAHIDI HAS LEARNED THAT "SUCCESS COMES FORM BEING PASSIONATE"