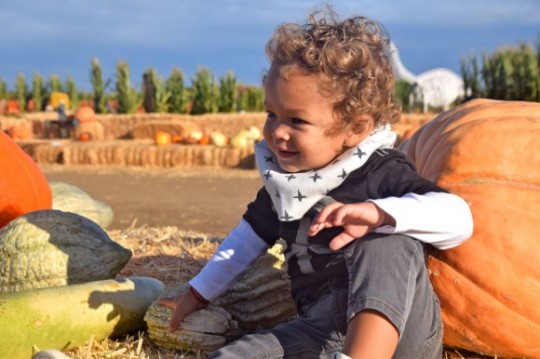 Aden Housley is such a cutie! The little one recently posed for pictures while at the pumpkin patch with mom and dad.

Aden smiled wide as he enjoyed the pumpkins and various sights. The little one appeared to be taken aback by the beauty of the day as he looked to the sky in one photo.

Tamera was excited to take her son to the patch this year because he was able to better understand his surroundings. “We took him to one in Los Angeles last year, but he was so small back then that he didn’t really comprehend what was going on,” wrote Tamera in her blog. “Now that he’s nearly two (I can’t believe it!), it was even more fun to see his reaction during the nearly hour and a half it took to get through the maze at Cool Patch Pumpkins.”

Aden will celebrate his second birthday on November 12, 2014. He is Tamera and husband Adam Housley’s first child together. Check out more pictures of the little one below!

KIM KARDASHIAN GOT A PAINTED HERMES GIFT FROM NORTH WEST