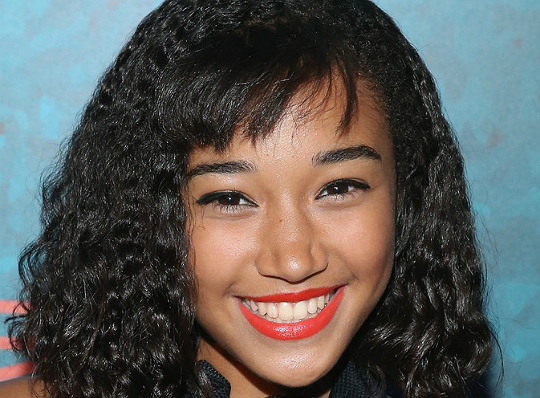 3 months after debuting her short film, The Yellow Wallpaper, Amandla took the time to speak with Spark  about her aspirations to become a director, and how her identity as a black feminist will play into her future behind the camera.

The young actress will turn 16 next month, and already she has formed some strong ideas about her position in the world as a black female. Unafraid to refer to herself as a “feminist”, Amandla spoke passionately about the importance of having black women behind the scenes.

I think there definitely needs to be more black women behind the camera. Those directors who are African-American women are so important to me, because representation is completely linked to inspiration and confidence within the African-American communities. I look up to those people and I hope that by being a director I can inspire and create representation by casting black women and sharing powerful stories. That’s the dream.

The Yellow Wallpaper is a strong start. The story was written by Charlotte Perkins Gilman in 1892. It is a fictionalized account of the writer’s own experiences with the rest cure — a form of medical treatment that was forced on Victorian women who were deemed “hysterical.”

Today, the cruelty of the rest cure has been done away with, but the themes in the story remain extremely relevant to the issues women still face.

Amandla explained, “I read the short story and I loved the themes it had around feminism. I like to call it sneak-attack feminism because it’s right there under the surface and it really highlights and exposes how women were treated with mental illnesses during that time, which I think is really interesting and really important.” Moreover, she pointed out that “there is still a stigma around women and mental illness and women being ‘crazy’ or being ‘unstable’.”

As women today fight against such stigmas, Amandla sees the story’s metaphor of being trapped under the wallpaper very applicable. She discussed the new surge of feminism she sees taking place in this new age of fighting for equality. The teen admits that for her, there was no moment in which she decided to become a feminist, rather, there was a moment in which she realized she was one.