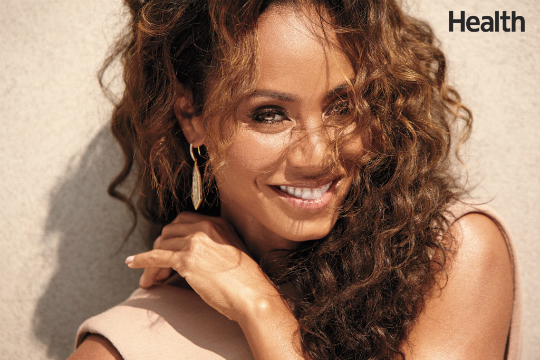 Jada Pinkett was recently interviewed by Health Magazine, and it turned out she had a lot to say about balancing a busy family and staying active.

When asked about the bikini-pic of herself on Facebook, the moment turned into a surprisingly emotional one. “Willow took that photo” Jada revealed. Teary-eyed, she explained that her daughter had said “mommy you look so beautiful in this picture.” The actress continued, “I couldn’t really see it, but I was so charmed that that’s how she sees her mother… Because when your kids get to be teenagers, they can get a little rough on you, you know what I mean?”

For all their eccentricities though, the Pinkett-Smith family has never been accused of being anything short of tight-knit. Keeping active as a family then, comes easily. Jada and Will spend quality time golfing together.

“Will is a much better golfer than me” she had to admit, but added “I can really wield my… not my irons. [Puts face in hands] I just totally went blank! The biggest club in the bag! Will’s going to be like, ‘You went blank talking about what?'” she laughed.

With the kids, they like to get a little adventurous.

We’re a sporty crew. We like to do stand-up paddling, a lot of surfing. Jaden is probably the most active because he’s gotten into cycling, like, eight miles a day. And he now eats like a madman, which I’m very happy about. He had gotten into juicing and just wanted to juice all day, didn’t want to have substance in his stomach. Well, let him get weak for a little while and he figures out, “Oh my God, I’m about to pass out.”

Letting Jaden come to his own conclusions speaks greatly to Will and Jada’s parenting approach. Their flexible style never gets passed the media. “People have always gotten on us about not punishing the kids” Jada pointed out. But she was proud to say that their experiences prior to Jaden and Willow made them aware of the need for kids to have the opportunities to make their own mistakes, and learn from them. She said, “I think we have to have more trust in our children… So by the time they’re out of the house, they fly.”

The actress also divulged tips for eating well, and the benefits of staying hydrated.

Her upcoming projects include the villainous role of Fish Mooney in the new Batman prequel-series, Gotham, and a documentary on human trafficking in the U.S. Of course, the documentary strikes a nerve with Jada, as it surely does for mothers all around the world.

Discussing the CNN project brings her immediately to tears. “You know, when bad things happen to me, and all this stupid crazy stuff people want to say about us,” she said, “I just think back to all these resilient young girls I have met who have not just survived this but are thriving. This kind of work will be in my life forever.”

MOMMY AND ME: EVA MARCILLE ENLISTS A SPECIAL CO-HOST FOR CHARITY PARTY