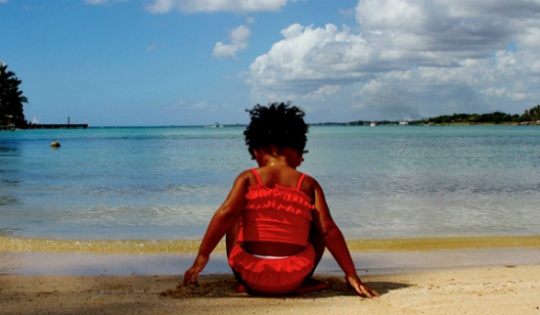 During a recent vacation to Jamaica, Blue wore this cute ruffled red bathing suit and so did her mama(not pictured).

The problem with living in a celebrity-crazed nation is that people think it is their right to comment, criticize, and take jabs at those who exist in the public eye. Sadly, this extends to celebrity babies as well.

After the VMAs, BET’s 106 & Park  published a segment entitled “6 Things Blue Ivy Thought About the VMAs”. On the list was the tasteless joke, “I really did wake up like this because my parents never combed my hair.” After reading the line, Karrueche Tran giggled and apologized.

As it turns out, some people did not find the joke (which, by the way, was NOT written by Karrueche) particularly amusing. The negative attention was enough to get the president of the network’s music programming, Stephen Hill, to make a public apology. “It was very bad judgement” he added.

But what’s the big deal?

Noting that this isn’t the first time Blue’s hair has been the butt of a joke, Kara Brown of Jezebel has taken this opportunity to not only shame those who feel the need to poke fun at a toddler, but also to point out that the joke is linked to the many years of systemic violence that black people have been subjected to. She suggested that because blacks were considered less-than for so long, that white standards of beauty are harshly imposed upon black girls and women. “So much about the ‘controversy’ surrounding Blue Ivy’s hair is rooted in the deep history of colorism in the black community.” She continued, “It also teaches people of color that their personal beauty increases the closer it is to traits commonly associated with whiteness (i.e. lighter skin and straighter hair).”

In other words, to criticize baby Blue for her hair, which is obviously a trait of her blackness, is to accept and rehearse racism. The issue is clearly not that Blue Ivy’s hair isn’t being taken care of – it’s that it’s being kept in its natural state, which happens to be “kinky.”

And why is this a bad thing? Shouldn’t the public be pleased to see parents making a decision to teach their daughter to appreciate her natural beauty rather than “fixing” her to appeal to unreasonable standards of beauty? Beyonce has never been quiet about her brand of feminism, and in fact brought it to the masses at the VMAs with her huge “FEMINIST” sign. So it only makes sense that she would bring her daughter up with feminist ideals, many of which strongly defend women’s rights to be themselves; to be comfortable with who they are and what they look like.

That being said, it’s highly unlikely that whoever wrote the Blue Ivy joke was seeking to attack concepts of feminism or endorse racism. But is this indicative of a larger problem?