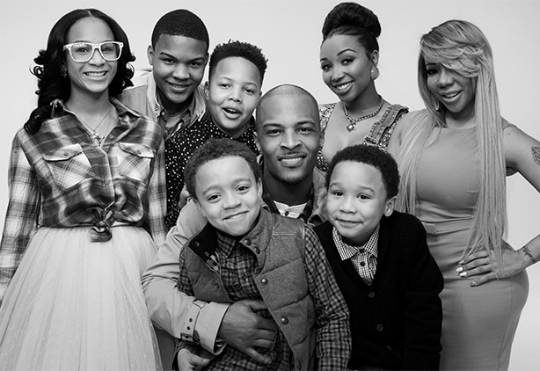 T.I. and the family are back! Premiering August 25th, T.I. & Tiny: The Family Hustle returned with a new passion – lemonade.

When the kids decide to start a lemonade business, Tip and Tiny are all for the opportunity to teach the young ones about the ‘hustle’. From business plans, to marketing, the competition was steep. Separating into teams for a  healthy dose of competition, the antics ensued. After the family weighed in with their own opinions and constructive criticisms (instantly readable on T.I.’s face), they took the vote to the public.

As one might expect, both teams had something special to bring to the table. While Major Lemonade proved to understand the value of marketing, Sugar Booger had the taste. Needless to say, Tiny and Tip decided it would be best to combine the recipes and ideas. Nothing says “family” like “teamwork.

The VH1 reality show is already in its fourth season, returning after a short mid-season break. The season began just after T.I.’s America’s Most Wanted Tour, and chronicles the day-to-day while Tiny is hard at work on her G.E.D. and managing the OMG Girlz, which features their eldest child, Zonnique Pullins.

All of their kids are growing up and entering new phases in their exciting lives. In an interview with MSNBC, T.I. was asked what he thought of the correlation sometimes made between his family’s show, and The Cosby Show. He said:

I think the comparison is flattering. I think we have to remind ourselves that was a scripted television show. Here, this is us. Because the show was so impactful and there was the ability to relate and they tied in the real American topics that still are relevant today. We also tackle relevant topics of America. I think that is the correlation… and of course we’re all black.

EGYPT DEAN IS TOO DOGGONE CUTE!