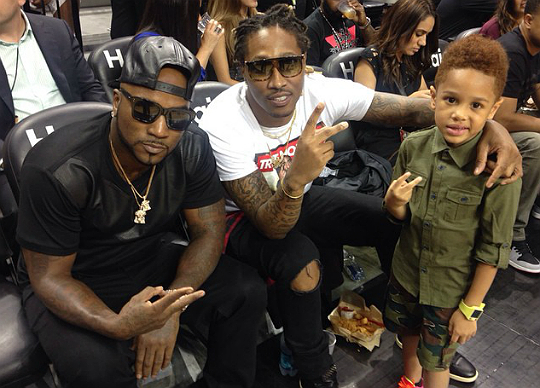 One benefit of being a rapper’s kid is that you get to hang out with all of the cool artists in the industry. This is definitely true for Johan, who had the pleasure of sitting front-row-and center with Future and other rap stars at this year’s Summer Classic Charity Basketball Game.

The youngster smiled and held up the peace sign while standing next to famed celebrities. R&B singer Chris Brown also took a picture with Johan while on break from playing ball on the court. “Papi’s team won,” tweeted mom Emily Bustamante of the game’s outcome that featured Fabolous and his team as winners.

Robinson Cano’s team was victorious over CC Sabathia’s squad at this year’s charity game of the season. The Summer Classic was held at Barclay’s Center, and attracted Rihanna, Tiki Barber and other celebs. Several star athletes also stopped by the game. Dellin Betances of the New York ‘Yankees’ and Endy Chavez of the Seattle ‘Mariners’ were in attendance along with Carmelo Anthony who spent a bit of time with Johan and Emily before leaving.

Fabolous and Emily are the proud parents of one child. Check out more pictures of Johan below!