ZENDAYA IS PRETTY IN PINK AT TEEN CHOICE AWARDS 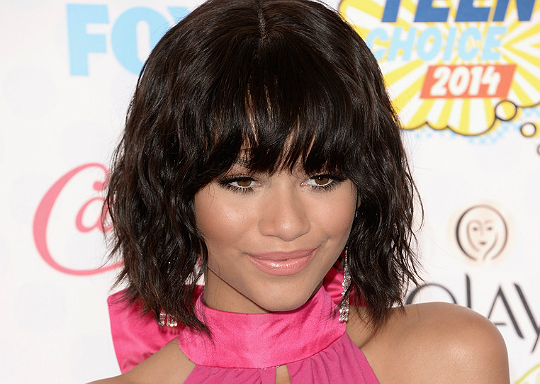 Zendaya graced the Teen Choice Awards donning a pink dress as a tribute to Madonna herself. The actress stated, “This is the updated version of the Material Girl.”

The dress was based on the iconic pink gown worn by Madonna in the video to her 1984 hit, “Material Girl.” The dress is part of the Queen of Pop’s clothing line, also named after the song. It featured a keyhole back and a big bow in the back. Zendaya rocked the dress at the beginning of the night, but later changed into a black and white zebra print number, completed by knee high boots. It was no surprise when she came out on stage to accept the award for Style Icon of the year, beating out other young beauties such as Ashley Benson, and Kendall Jenner.

Zendaya became the face of Madonna’s line Material Girl – co-owned with by her daughter – this summer, and excitedly announced it via blog: “I can’t believe that Madonna and Lola chose me!!(Wait, that means they know who I am!!)”

The starlet also debuted a new ‘do, her hair had been cut into a wavy bob with bangs. Still only 17 years old, she looked like the mature and elegant woman she is quickly becoming.