THE CARTERS SWING BY NEW ORLEANS 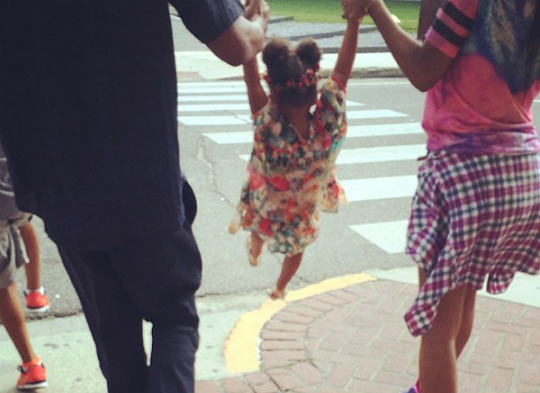 Make way for the Carters in New Orleans. Beyonce, Jay-Z, and Blue were recently spotted in The Big Easy with other family members. Bey and Jay appeared to be indulging in a bit of R&R as Solange and Tina Knowles toured the city with them. Blue was the adorable one with a flowery dress and head bows to match. Jay-Z was recorded as he protectively took his daughter to the car with Beyonce following him with a smile.

The Carters have been visiting New Orleans a lot since Solange moved to The Crescent City. The youngest Knowles sister lived close to Beyonce and Jay-Z in New York before deciding to explore new territory in the Southern part of the country. “I’ve thought about moving to New Orleans for years but just never had the courage to do it,” said Knowles during an interview with Harpers Bazaar earlier this year. “Now my son is at that age where he’s really establishing friends and a community, so I feel like this is a good time to try it out. I consider myself a dual citizen at this point,” added the star.

Solange has one child, Julez, with ex-husband Daniel Smith Sr. Blue Ivy Carter is Beyonce and Jay-Z’s first child together.

5 WAYS TO NURTURE YOUR LITTLE ENTREPRENEUR

5 WAYS TO NURTURE YOUR LITTLE ENTREPRENEUR