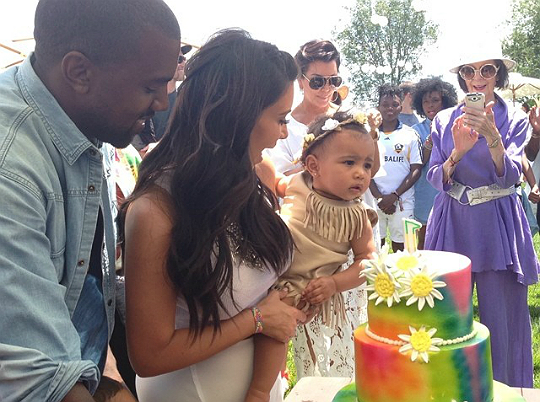 In an interview with GQ magazine, Kanye West was questioned about his feelings on the media and how being a celebrity affects his life, and family. Although the rapper seems to be conflicted on the matter, one thing he made clear was that he wishes to give his daughter a “normal” life.

In what was reported to be a 45-minute toast to himself at his wedding, Kanye explained his issues with celebrity. He recounted the highlights to GQ, stating, “And what I talked about in it was the idea of celebrity, and celebrities being treated like blacks were in the ’60s, having no rights, and the fact that people can slander your name. I said that in the toast. And I had to say this in a position where I, from the art world, am marrying Kim. And how we’re going to fight to raise the respect level for celebrities so that my daughter can live a more normal life. She didn’t choose to be a celebrity. But she is. So I’m going to fight to make sure she has a better life.”

But of course this brings about the question of why – why has Kanye pursued stardom if this is how he feels? Well, when asked if he is comfortable having so many eyes on him, the star noted: “That wasn’t my goal. My goal is just to be respected as a man when I walk down the street with my family.” Later on he also added, “Yes, we are celebrities, but yes, we’re also innovators, we’re also inventors, we’re also thoughtful.”

At the end of the day, whatever inner turmoil Kanye faces about his role as a celebrity seems minor compared to the happiness he exudes for his new gig as a family-man.

“Going home to one girl every night is super cool”, he said. “Just going home and getting on the floor and playing with your child is super cool. Not wearing a red leather jacket, and just looking like a dad and shit, is like super cool. Having someone that I can call Mom again. That s**t is super cool.”