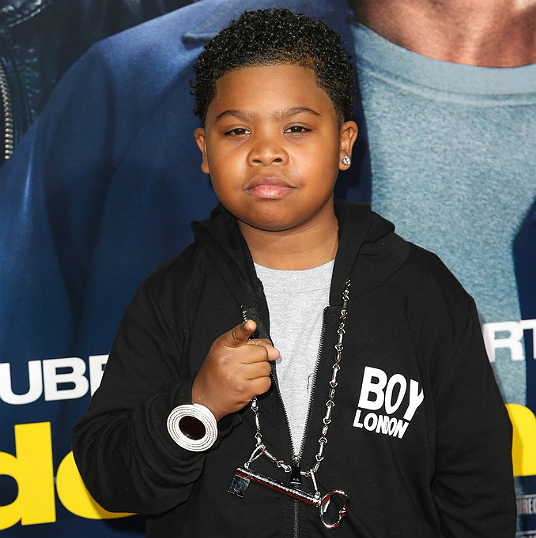 He is set to star in the upcoming Nickelodeon TV film “Santa Hunters.”

“It’s a lot of fun stuff happening in the movie,” he told Jet Magazine about the upcoming film. “You’re going to see a lot of cool things.”

In the holiday flick Lil P-Nut portrays Alex, a young boy trying to prove (with the help of some of his family) that Santa Claus is real. They catch Santa on film and while excited, they realize that revealing him may ruin Christmas forever.

Lil P-Nut credits his work ethic to landing him the role.

“They already casted us, so we already had the role. I guess because they see our work on The Haunted Hathaways,” he said. “They see how good we are, how motivated we are and how we have the drive to do it.”

While busy working on the new movie and his current role in the Nickelodeon show “The Haunted Hathaways, Lil P-Nut  is making time to plan a celebration for his upcoming 12th birthday in July.

“I want to get all the dudes to dress up in tuxes and all of the girls in dresses. I’m going to order a limo service, and we’re going to ride down Hollywood Boulevard,” he stated. “We’re going to stop at a wing place, and go to my house. This is the crazy part. I want everyone to jump in the pool with all of their clothes on!”

For more Lil P-Nut, check him out on “The Haunted Hathaways” on Nickelodeon Saturdays at 8:30 p.m. ET. Also, stay tuned for more information on the “Santa Hunters” premiere.

FAITH EVANS ENJOYS BIRTHDAY DINNER WITH ALL OF HER KIDS

TAYE DIGGS ON SON: 'THE BEST IS SEEING THE EXPRESSION ON HIS FACE AFTER SCHOOL'

TAYE DIGGS ON SON: 'THE BEST IS SEEING THE EXPRESSION ON HIS FACE AFTER SCHOOL'