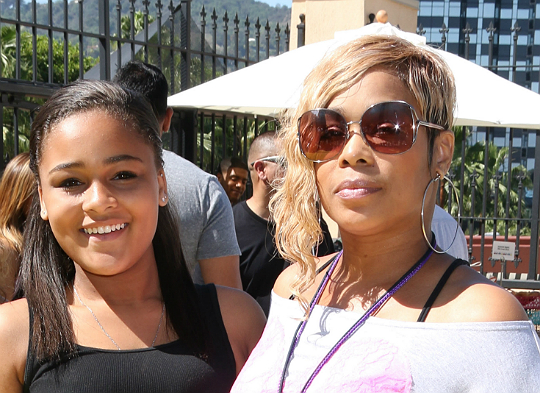 Tionne ‘T-Boz’ Watkins and her daughter, Chase, enjoyed the minions ride at Universal Studios Hollywood this past weekend. The mother-daughter duo brought a friend along to have a bit of fun with them, and were sure to take pictures together while on the yellow carpet.

Despicable Me is turning out to be one of the most celebrated movies Hollywood has seen. Not only does the film have products that are selling like crazy in stores but it also has a sequel to the first edition that is still growing in stamina despite its last showing in public theaters weeks ago. It seems as though fans can’t get enough of Gru and the family.

Dana Gaier, who voices Edith in the movie, tells media that she never dreamed the kids’ film would turn into popular culture’s next big thing. “It’s super weird to hear yourself on a ride,” says the actress. “When I first went on the one in Florida, I was like, ‘Wait, is that me?’ I love doing the films. When it’s just me and I’m in the booth doing the voice, I get really into it and throw my arms up into the air … it’s seriously so much fun.” Miranda Cosgrove, the voice of Margo, also comments on the movie’s success saying, “I never thought, when I went in for my audition, that it would turn into all of this.”

Despicable Me is currently out on DVD, and the theme park attraction is available for riding at Universal Studios. Chase is T-Boz’s only child with ex-husband Mack 10.