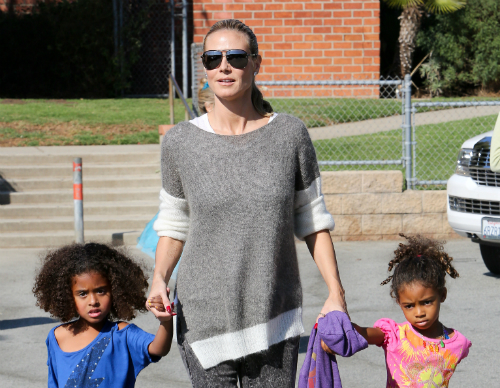 Lou and Peyton are best pals. The daughter of Heidi Klum and princess of Kenneth “Babyface” Edmonds were recently spotted out-and-about, looking fabulous as ever.

Peyton held Heidi’s hand as the model walked around with her daughter, Lou. Babyface joined the group for a cup of Pinkberry after they left a nearby park.

Edmonds is one of several celebrities slated to appear on Oprah’s ‘Next Chapter’ this season. Reverend Al Sharpton will also be featured on the show, discussing his role as a civil rights activist.

Kenneth and fellow artist Toni Braxton are currently working on an album called Love, Marriage & Divorce, which will make its debut in coming months. Braxton tells media that the collaboration is perfect as she and Babyface have both endured divorce. “I think because Babyface and I have both gone through divorces, we can relate and we can collaborate together on this topic and make it so others who have gone through this situation can relate,” says the singer.