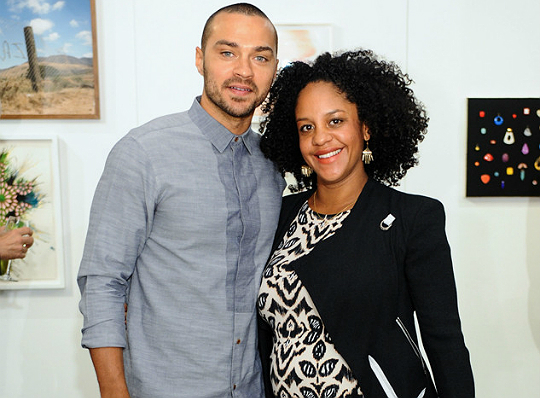 Pregnancy looks fabulous on Aryn Drake-Lee. The wife of Jesse Williams was recently spotted at a charity event, looking gorgeous in black. Aryn’s dress accented her bump well as it curved in all of the right places to show off her pregnancy.  The mom-to-be also recently attended the 12 Years Of Slave premiere, but chose to not walk the red carpet with her husband.

The media got wind of the Williams’ expectancy a few weeks back. Us Weekly confirmed with a close family friend that Aryn was in fact pregnant, telling its readers that the real estate agent had a baby shower on September 29, 2013.

Jesse recently spent time with Elmo, in preparation for fatherhood, on the set of Sesame Street. The actor told Entertainment Weekly, “I was excited because Elmo is a slick character. A lot of smart, under-the-breath humor. Very witty, very fast, which is an ideal scene partner. So I was excited, and I knew that it would be fun and that it would be spontaneous and we’d get to riff a bit and improv a little bit.”

The Williams are expecting their first child together in December.