Home » NEWS » JACKSON BOSH TAKES A BREAK IN THE SUN 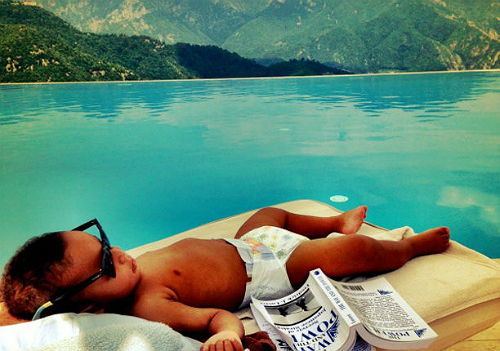 It’s the good life for Jackson Bosh who was recently photographed in full relaxation mode by the water. Mr. Bosh stretched out across a patio chair while wearing sunglasses and having lots of books surrounding him as dad, Chris Bosh, looked on humorously. “He thinks he has it rough,” tweeted the Miami ‘Heat’ player.

Chris took his passion for basketball beyond his family and the boundaries of the United States with his recent trip to India. Bosh spent four days expressing his love for the game to kids who could grow up to be great players themselves one day saying, “I am excited for the chance to visit India and help build interest in the game I love. The NBA is a global game and I hear that basketball is becoming pretty popular over there so I am looking forward to teaching kids that may end up in our league one day.”

Jackson has attended nearly every game that Chris has played since his birth in May 2012. The tot sat front-and-center with mom and big sister Trinity to watch Bosh and the Miami ‘Heat’ capture the NBA championship for the second year in a row a few months back.

The 1-year-old is Chris and wife Adrienne Bosh’s first child together. The couple are expecting their second child, a girl, to arrive in the coming months. Chris Bosh has three kids in all.

DERRICK ROSE: 'FATHERHOOD IS THE BEST FEELING IN THE WORLD'