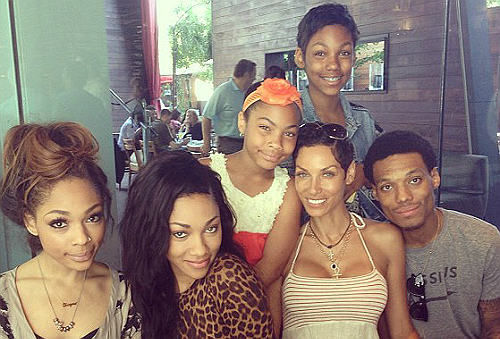 Nicole Murphy is getting back into the groove of modeling and encouraging her kids to be individualists. The superstar recently sat down with Ebony magazine to talk about her role on ‘Hollywood Exes,’ and gave a bit of insight into her life as a result of being on the show.

Not only has Nicole been privileged to make new friends on the reality series, but she has also received the opportunity to get back into modeling since making her debut on the show. “I kind of jumped back into it,” said the star. “Which is funny, because [I was] thinking I’m too old to be back in the modeling game! People want to shoot me and use me for stuff.”

Nicole has five kids with ex-husband Eddie Murphy. Although they have much to glean from in having a successful mom and dad in the entertainment industry, Nicole told Ebony that she encourages her kids to be true to themselves. “I always tell them: find something that you love to do, that way it won’t be hard for you. Everything will come easy. And so I always put that in there. Who knows what the future will be, but whatever it is, I will support them 100 percent. All I can do is just give ’em that advice when they want it,” explained the star.

Eddie Murphy wed Nicole in 1993 after meeting her at the NAACP Image Awards years before. The couple finalized their divorce in 2006.

CONNIE BRITTON SAYS IT IS ‘SCARY’ BEING A SINGLE MOM

CONNIE BRITTON SAYS IT IS 'SCARY' BEING A SINGLE MOM