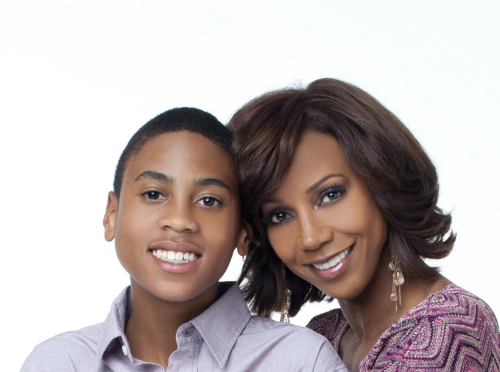 It was all about the blue as Holly Robinson-Peete and thousands of other parents celebrated Autism Awareness Day on April 2, 2013. Recognized as an international event, Autism Awareness Day sheds light on the disability that affects 1 in 88 children. This year, in addition to wearing blue, Holly shared her experience as a mom with an autistic son with Huffington Post readers.

Robinson-Peete began her story with her reaction when R.J. was diagnosed with autism saying, “In January of 2000 I heard words that would change my life: ‘Your son has classic autism.’ I remember thinking then — desperately seeking a silver lining — is “classic” a good thing? Like a “classic” car or film? Then the very ‘bedside-manner challenged’ pediatrician who was delivering this news went on to rattle off the many things our RJ would “never” do: talk, make friends, mainstream in school, participate in organized sports…It felt as though the bar of his life was lowered to within an inch of the ground. He was just 3.”

Although there have been a few hiccups along the way, Mrs. Peete told Huff Post readers that her son is beating the odds and growing into a vibrant young man. “Smash cut to: 10 years later — not only had RJ checked all of these ‘nevers’ off his list but he had exceeded so many expectations which had been so easily dismissed by this diagnosis,” said the actress. “One of RJ’s favorite things to do is walking to and from the local Coffee Bean. It took me forever to let him go alone. I’d drive along side of him the whole seven blocks like Stalker Mommy. The staff there is so sweet to him. They always have his drink ready with extra caramel in the sides of the cup.”

Robinson-Peete added, “And he LOVES his hoodies. He covets and obsesses over them. Sensorily, he just loves how they feel on his head and body. But he also just thinks they are cool and they are folded and organized by brand in his closet. He looks at me with pure confusion when I try to explain why I worry about him wearing them when I am not with him. He also likes to keep hands in his pockets. Again, a sensory thing. That’s my awesome, quirky kid!”

Holly hopes that Autism Awareness month will bring about more compassion and acceptance in society. “April 2 is World Autism Awareness Day and April is Autism Awareness Month,” she writes. ” As a relentless autism mommy and advocate, I am always trying hard to kick up the level of awareness about the fact that these kids grow up quickly and can and should become valuable and valued citizens. A person with autism doesn’t know how to be anything else but sincere. When our kids experience adolescence they need compassion, purpose, empathy and friends.  Autism needs more friends.”

R.J. is her and husband Rodney Peete Sr.’s eldest son. The couple have four kids in all.