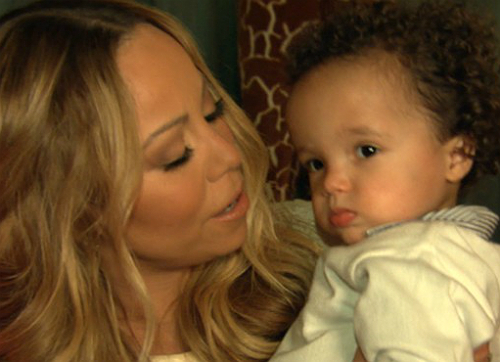 Mariah Carey is quite the busy one, preparing for her 14th studio album release and judging the many contestants on this season of ‘American Idol.’ Although her schedule is hectic, Mariah took time out to talk with ABC‘s Barbara Walters about her career, motherhood, and more.

Mariah was ever the proud mom as she talked about her twins, Monroe and Moroccan. Carey calls her 1-year-old daughter Miss Monroe because, “She’s a total diva. She’s into jewelry. She’s fascinated by jewelry.” As for Moroccan, “He’s my pal. He’ll just watch movies with me. We’ve watched ‘Shrek’ I don’t know how many times. We watch movies all the time together, relax. He’s more chill,” said Carey.

Despite previous drama with fellow judge Nicki Minaj, Mariah enjoys critiquing the thousands of hopefuls on this season of ‘American Idol.’ As she explained to Walters, “Ultimately, this is about the kids, the contestants. I’ve been blessed to live my dream more than half my life, so I want help give that back to someone else.”

Check what else Mariah had to say!