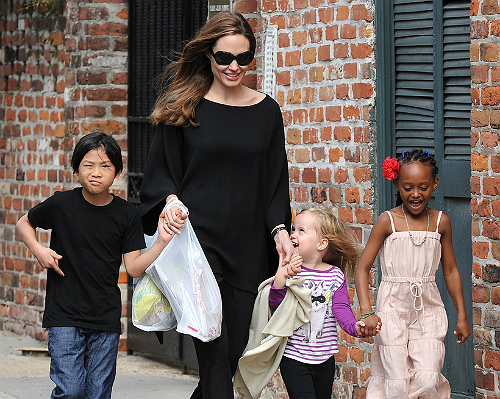 Angelina Jolie and Brad Pitt’s children Pax, 8, and Zahara, 7, are reportedly set to star in the upcoming fantasy movie “Maleficent,” which stars their mother.  The couple’s  4-year-old daughter Vivienne was the first Jolie-Pitt child to be cast in the film. Vivienne will play the role of a princess, while her siblings will have smaller roles.

“They have smaller parts,” reveals a source to Usweekly, who adds that Pax and Zahara won’t have speaking roles. “Shiloh was supposed to be in it, too, but she was bored and not in the mood during the day her part was supposed to happen, so she ended up not being in the film.”

“Maleficent”, which is a retelling of classic fairy tale Sleeping Beauty, is scheduled to hit theaters in March 2014.

Angelina and boyfriend Brad Pitt are also parents to Maddox, 11, and Knox, 4, and Shiloh,6.