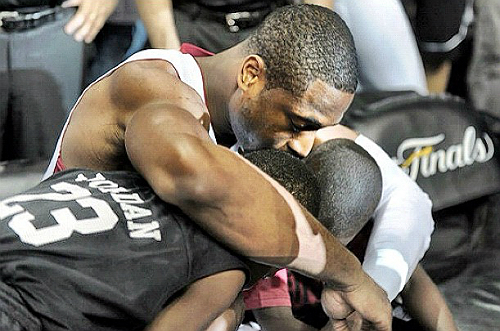 Dwyane Wade wasn’t always excited about fatherhood. In fact, he could think of a time when the idea of being a dad was something that he wanted to avoid.

“I was 19 years old and in Florence, Italy, playing for a traveling team, when I got the call. It was my girlfriend. I had a child on the way. The first thing that came to my mind was that I’m a kid myself. I don’t know what I’m going to do in life. I have no job. I’m coming off of not playing my first year because I had to get my academics right. I’m confused and think, ‘This can’t be happening to me. Not right now.'”

Although nervous at first, Wade turned that negative energy into motivation to be the best that he could be for his kids. “That negative moment became my favorite mistake,” says the NBA superstar. “What got me through it was finally holding my first son when he was born. I do a lot of things and I go a lot of places. I’ve been successful in different areas, but nothing brings a smile to my face more than my oldest son, Zaire, and my second son, Zion, saying the kind word of ‘Dad,'” the basketball player adds.

Through the years, Dwyane has established a give and take relationship with Zion and Zaire in which he gives them a lot and takes a few life lessons for himself. “After we lost the championship in 2011, I was sleeping all day in a dark room, and I didn’t want to come out. They came knocking on the door. And as much as I didn’t want to see a basketball, they said, ‘Dad, can you come out before it gets dark and play with us?’ I said I was on my way. And that was a thrill to them. They just loved the game, and it didn’t mean anything to them aside from getting the chance to play with their dad. They got me over the loss.”

Zion and Zaire help their dad stay focused on what matters in life as Dwayne explains, “Whenever I feel like I’m getting too far away from where I need to be, I think about my sons and the legacy I have to leave for them—and it always brings me back to reality.”

Wade’s book, A Father First, made its debut at the beginning of Fall. It is currently being sold at all major bookstores and online outlets.

TAMERA PREPARES FOR HALLOWEEN DUE DATE

TAMERA PREPARES FOR HALLOWEEN DUE DATE