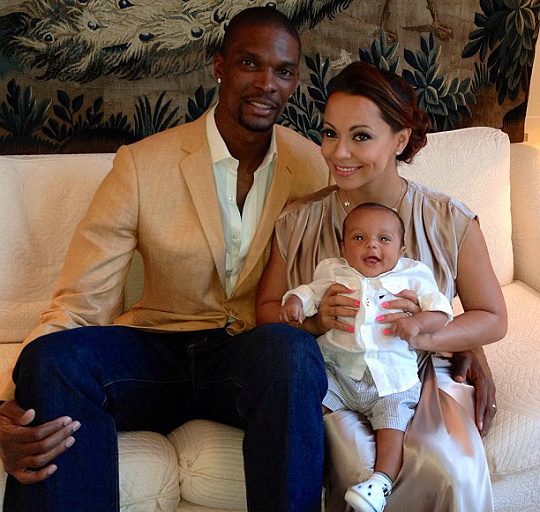 NBA player Chris Bosh, his wife Adrienne Bosh, and three-month-old son Jackson pose for a family picture while in France this week. The Boshes are now in London to watch the USA play in the Olympics

The family of three recently set up residency in Texas. It was rumored that Chris decided to make the move to avoid giving more money in child support to his daughter Trinity’s mother. Sister2Sister magazine reports, “Seemingly, Chris [is] claiming residency in Texas so that he doesn’t have to pay his babymama Allison Mathis more than he’s currently giving her, which is about $2,600. Since she lost her job, though, Allison claims that amount barely covers her mortgage.”

Bosh was asked to pay $30,000 per month in child support while living in Florida, which is about  3% of Chris’ income. The case will now be heard by a Texas judge, and a decision on whether or not the Miami ‘Heat’ player will be forced to pay more than $2,600 per month will be made thereafter.

Check out more pictures of the family below.