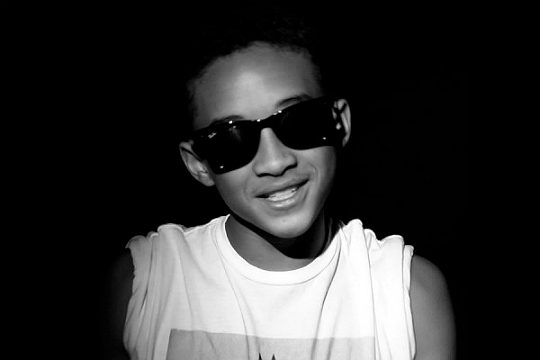 Teen star Jaden Smith has exclusively shared his latest solo track “Give It To Em” with media personality Ryan Seacrest. In the self-penned track, Jaden,13, raps about his life and riches:

Young, black with accessories / And i’m doing well, never seen a penitentiary
‘Cause they can’t sentence the greatest MC they’ve ever seen — no i’m not, but if you’re going to bother me, then you better be

“Jaden is probably the one of my kids who looks at me like I’m meat,” dad Will Smith said recently in an interview with Celebuzz. “He’s like, ‘I’m coming for you. You have no idea!’ He’s looking across the dinner table at me.”

Will added, “I tell him all the time, ‘Son, listen. I’m going to teach you everything I know. You’ll work hard and, y’know, you’ll be the second biggest movie star in the world!”

Jaden will be starring in upcoming movie M. Night Shyamalan‘s next film “After Earth” alongside his dad.

MADONNA AND KIDS AT THE KABBALAH CENTER