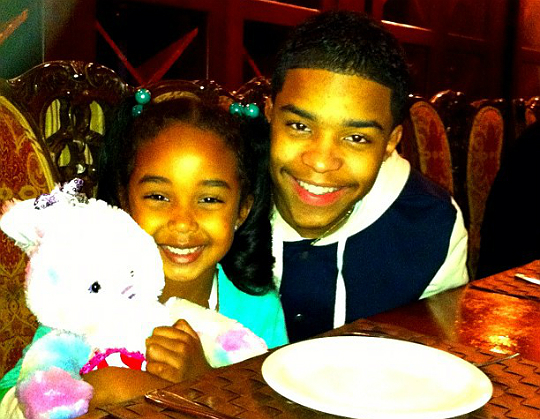 Justin Combs snaps a picture with his sister Chance Combs while dining out. The teen recently tweeted, “Me & my little princess Chance.” Sean Combs, a.k.a. Diddy, later retweeted the picture, saying,” My son and daughter! God is so Great!!!!”

Justin and Diddy recently showed their support for the Trayvon Martin Movement by posting pictures of themselves dressed in hoodies to Twitter. To date, over 300,000 men and women have shown support for the murdered Florida teen by either wearing a hooded sweatshirt or voicing complaints about the Sanford Police Department’s handling of the case. Several celebrity parents, including LeBron James and Tichina Arnold, are demanding justice for Trayvon.

Check out more pictures of Justin and Chance below!