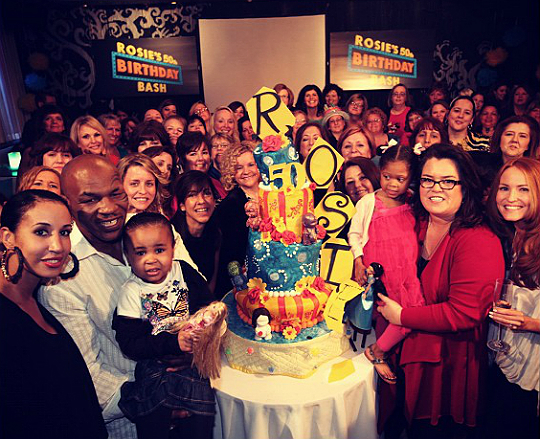 Lakiha and Mike Tyson along with their daughter Milan helped Rosie O’Donnell celebrate her 50th birthday at Studio Paris in Chicago, Illinois on Monday, March 19, 2012. Tyson’s niece was also in attendance at the event.

Mike recently conducted an interview with USA Today in which he discussed family values and his ambition to be surrounded by loved ones in old age. Tyson states, “I want to die being a married guy. I don’t wanna die doin’ cocaine or liquor. A friend said, ‘Mike, don’t you feel stupid, your old (expletive) dealing with these two young kids?’ That is what I want in my life. I want to be hen-pecked, man. I don’t want to be 55 and still (acting) tough with cigarettes rolled up in my sleeve. I just want to have some balance. Either I’m a pussycat or a blood-thirsty conqueror. But I’m trying to work it out. I just want my wife to really like me. I don’t want her to leave me and take the kids.”

Mike and Lakiha, who wedded in 2009, have two children together. The boxer is the proud father of eight children. Below is one more picture of Milan and her little brother Morocco.