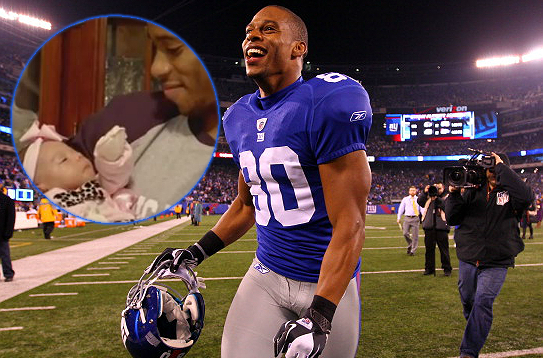 The New York Giants triumphed over the New England Patriots at the 46th NFL Super Bowl on Sunday, February 5, 2012. While many players and fans of the Giants attributed the success to hard work Victor Cruz gave credit to his baby girl.

Prior to playing the big game, Cruz asked girlfriend Elaina Watley to bring their 3-week-old daughter to Indianapolis. Watley states, “This is her first time out of the house. Victor said she couldn’t miss a moment. If the baby is there, he wins. He was like, she has to be there.”

Elaina has supported Victor since his high school days of playing football. As she explains, “I went to every [NFL] game while I was pregnant. I went into labor two hours after the Atlanta Falcons game. My water broke. It was probably from me jumping up and down.”

Cruz and Victor have been in an exclusive relationship for several years. Baby Kennedy is their first child together.

NELLY AND HIS MINI ME