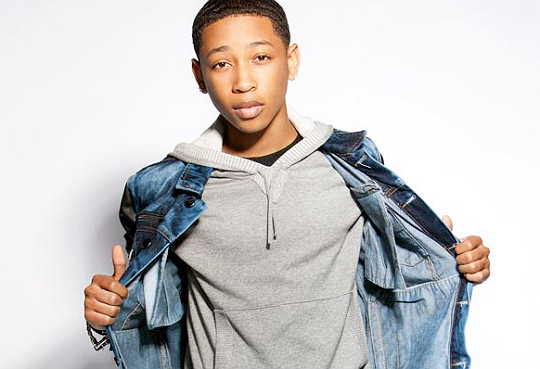 Jacob Latimore,15, recently sat down with YouKnowIGotSoul to talk about his singing and acting careers. The teen star addressed everything from his upcoming album to working with various artists in the music industry.

On the new album.

“My debut I’m working on now, I’ve just been in the studio with a lot of great producers and writers and just having fun. I can’t wait for it. The new single will be coming out this year too. I just can’t wait, it’s going to be amazing, and it’s going to be different.”

Artists that he has collaborated with.

“R. Kelly, Claude Kelly, Rico Love. It’s been a lot of great artists so I’m just happy that I got the chance to work with them.”

On working with Diggy Simmons.

“A few months before I even met Diggy, Diggy was one of my favorite young rappers out right now so it’s a person I really wanted to work with at the time. I was in New York recording at the time and a friend of mine named Walter was like ‘I know Diggy, he’s down the street, I’m going to go say what’s up to him.’ So I said ‘Wait a minute, let me go with you!’ So I took a break from my session and went to his session and came to find out he already knew about me and saw some of my YouTube videos. I was pumped because I was a fan and I told him I wanted to do a song with him. I was actually getting ready to leave the next day, but he called and asked me to come down to the studio that day, so we cancelled our flight and stayed an extra day in New York. I recorded on one of his songs called ‘You Got Me Now’ off of his mixtape and he kinda just returned the favor with ‘Like Em All.’ He recorded the song and then a few months later we shot the video for it. It was a lot of fun.”

“The Scream Tour was amazing, it was dope just to be carrying on that legacy. When I was younger I watched my favorite artists on there like B2K and Omarion and Bow Wow. So it was fun that I got a chance to go on that tour especially with kids around my own age. I’m also going on Diggy’s tour as well next month.”

A career in acting underway?

“Definitely. I just guest starred in ‘Read Between the Lines,’ a new BET show with Malcolm Jamal Warner and Tracy Ellis Ross. That recently just aired. It’s kind of a spin off from my own show that BET created called ‘Young Man on Campus.’ That’s about a 15 year old boy in college and he’s kinda dealing with the obstacles of that and dealing with the big boys.”

JENNIFER HUDSON GETS SUPPORT FROM HER FAVORITE MEN

JENNIFER HUDSON GETS SUPPORT FROM HER FAVORITE MEN