Home » NEWS » LEBRON PROPOSES TO GIRLFRIEND IN FRONT OF CHILDREN

LEBRON PROPOSES TO GIRLFRIEND IN FRONT OF CHILDREN 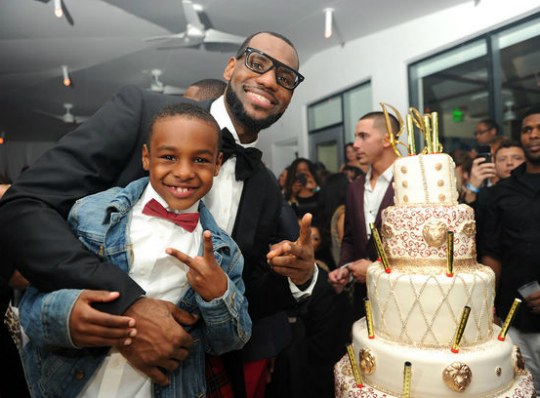 LeBron James popped the question to Savannah Brinson, the mother of his two children, on New Years Day at Shelborne, South Beach in Florida. The NBA star asked his high school sweetheart to marry him after several years of being on a girlfriend-boyfriend relationship status.

PHOTOS: See More Pictures Of Lebron And Co. At Shelborne

“Following his countdown duties with Wade, Bosh, hotel owners Keith Menin and Jared Galbut; the group stepped away from the SL Nightclub hosted bash to return to the restaurant where James got down on one knee and proposed with a large shimmering diamond.  The unexpected proposal caught Brinson off guard and was responded to with tears of joy and of course, she accepted! Adding even more bling and celebration to the event, James’ towering birthday cake was wheeled out to the table – draped in swarovski crystals and edible 18 carat gold – in which the group was cued to begin singing Happy Birthday as they raised their glasses to the beaming basketball star and happy couple.”

The happy couple was joined by Dwyane Wade, Chris Bosh, Gabriel Union, and a host of family members including James’ mother.  Bryce,4, and LeBron Jr,7, were in also attendance to witness their father and mother’s special moment. Singer Lauryn Hill rendered several musical selections after James proposed and Brinson accepted.

CONNOR DISCOS THE NIGHT AWAY