Home » NEWS » MAGIC 20 YEARS LATER: ON BREAKING THE NEWS TO HIS WIFE AND BEING A FATHER

MAGIC 20 YEARS LATER: ON BREAKING THE NEWS TO HIS WIFE AND BEING A FATHER 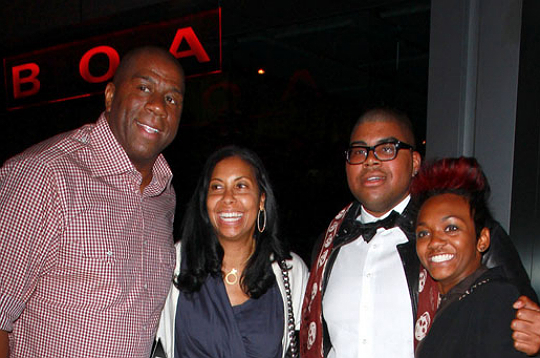 It has been twenty years since former NBA star Magic Johnson announced his HIV illness to the world. The entrepreneur recently sat down with Sports Radio Interviews to discuss his initial feelings after hearing the diagnosis and moving forward with the virus. Among other things, Johnson discussed his wife’s reaction to the news and his life as a father of three.

PHOTOS:Click here to see archived pictures of the Johnson family

The difficulty of the news and telling his wife, Cookie.

“We were in Utah, the Lakers, to play an exhibition game against the Jazz and I get a phone call to wake me up out of nap that says … you’ve got to come back to Los Angeles. I said, ‘Can I play the game first?’ He said, ‘No, get on a flight right away.’ So I flew back to L.A. and he began to tell me that I had HIV. It was just devastating, man. It almost took my breath away from me. I was in disbelief, even for hours. … Then I had to drive home to tell my wife, Cookie, that I have HIV, and she was pregnant with our son E.J. at that time and she began to cry. She was devastated. Later on we found out she was OK and our baby, E.J., was OK.”

“I play my daughter, who’s 16, one-on-one. We’ll play to 10. I let her get to nine and then I’ve got to crush her, I’ve got to beat her. … Cookie says, ‘You can let your daughter win.’ No, I can’t let anybody win. I’ve gotta crush her. I don’t care who I’m playing against. My grandkids, right now, three and the other one’s eight or nine months. If I play them one-on-one, I’m going to crush them, too.”

Get the full interview here.

The former NBA player is pictured above with his wife Cookie and kids Elisa and Earvin III.

JAY-Z TALKS FATHERHOOD AND 'BEING THERE' FOR HIS UNBORN CHILD