Home » NEWS » ROBIN GIVENS ON BEING A MOM 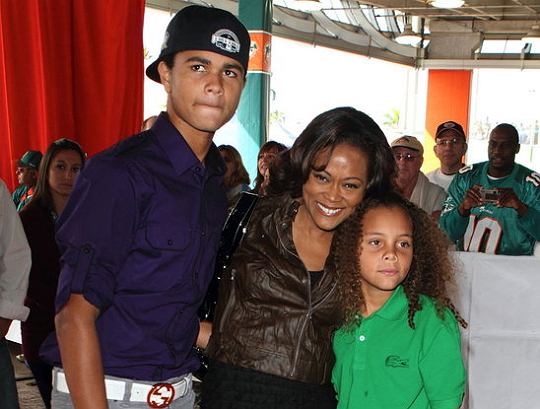 Robin Givens talked motherhood and a plethora of other things in a recent interview with LA Stage Times. Although Givens, 46, has enjoyed a flourishing career in past times, she is more focused on being a great mom these days. As the actress explains, “I want to give the world two good men – and be present. That’s the most important thing for me. I want to really sit and enjoy the blessing of my children.”

PHOTOS: More pictures of Robin and her sons

When referring to daily tasks associated with motherhood in conjunction with her new playhouse project Givens says, “Preparing to go on stage, I, um, it’s a tough one being a mom. All of these things have to be done first. There’s a school drop-off, social studies, pre-testing, getting lunch ready. I do lots of yoga. I have to settle myself and center myself.”

Givens has starred in several television shows and feature film productions during her career. She also made numerous appearances on Tyler Perry’s House of Payne. The actress now portrays a troubled 1930s singer named Angel in the play production, Blues For An Alabama Sky.

RISING TO THE TOP: THE RACHEL CROW STORY

NICK CANNON TALKS FATHERHOOD AND NOT SELLING THE TWINS' PHOTOS

NICK CANNON TALKS FATHERHOOD AND NOT SELLING THE TWINS' PHOTOS