Home » NEWS » HEIDI AND SEAL ARE HOPING FOR A GIRL

HEIDI AND SEAL ARE HOPING FOR A GIRL 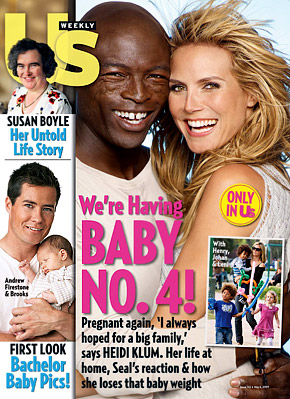 Singer Seal and his Supermodel wife Heidi Klum are hoping that their next offspring will be a girl. The parents of daughter Leni,5, and sons, Henry,3, and Johan, 2, say that it would love to have another daughter.

“We’d be happy with either,” Heidi tells Us Weekly in her only interview about her fourth pregnancy. “But it would be a lie if I said we all weren’t hoping for a little girl — especially Leni, because she would love to have a little sister.

Find out how the couple confirmed that they are expecting

Leni is Heidi’s only daughter from a previous relationship and apparently, Leni is looking forward to having a big sister.

CATCHING UP WITH THE COMBS TWINS

CATCHING UP WITH THE COMBS TWINS