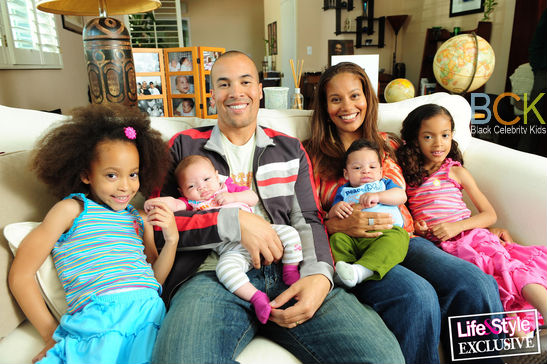 [See an even larger picture of the family below!]

Actor Coby Bell is best known as playing captain Jason Pitts on the CW sitcom The Game.  When he is not playing captain, Coby is busy being a husband and a dad to 5-year-old twin girls, Jaena and Serrae, his wife Aviss, and a second set of twins named Eli and Quinn, born on Dec. 2 of last year.

Via LifeandStyleMagazine: “We were trying for a boy and ended up with a boy and a girl!” Coby, 33, recently told Life & Style at his surprisingly tranquil Long Beach, Calif., house. The addition of daughter Quinn and son Eli has meant a lot of sleepless — yet happy — nights for the couple. While Coby snoozes on the living room couch with one of the babies, Aviss, 39, tries to catch some shut-eye in their bedroom with the other infant. “We’re going to do that until they’re 5½ months old, and then Coby’s going to Ferberize them,” Aviss tells Life & Style. (Ferberization is a method that teaches infants — even if crying — to soothe themselves to sleep at bedtime. Parents can comfort the child but only after waiting increasing intervals of time.)


“Coby did the same thing with the big girls,” continues Aviss, who owns Look What I Made, an arts-and-crafts play space for kids. Jaena and Serrae also do what they can to keep their little sister and brother from wailing. “They really, really want to be there for Eli and Quinn,” Aviss boasts. “It’s so cute.” Coby is just as proud of how eagerly the girls have taken to their big-sister role. “They’re great,” he says. “They’re very lucky to always have someone there to laugh and play with.” 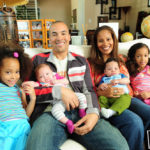 For more on Coby and his family, pick up the latest issue of Life & Style, on newsstands now!