Home » USHER IS ON A NATURAL HIGH

Singer Usher Raymond is said to be on a natural “high”.VIA MTV: 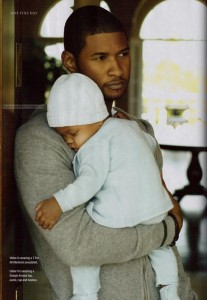 Usher is on a high right now. He’s elated to have attended Barack Obama’s inauguration and the surrounding celebrations; his new album is coming along pretty well; and when he goes home, there’s a month-old baby boy waiting for him. His second son, Naviyd Ely Raymond, was born in December, and the singer said he was right there in the delivery room.

“I would never miss any of my children being born,” he told MTV News. “It’s an incredible experience. Any person who has children can definitely agree with me when you say it is by far one of the greatest experiences of life. I’m very happy.”

Usher was one of the performers during the “We Are One” inaugural concert in D.C. on Sunday. He said his political experience the last couple of years has inspired some of his new music.

Usher and Tameka were married in 2007 and have another son, Usher Raymond V(pictured above), 14 months.