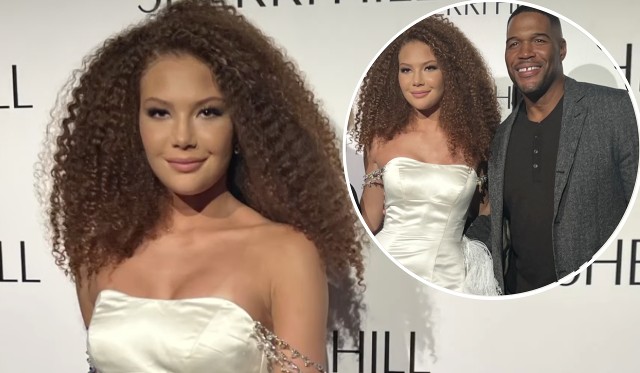 Michael Strahan’s daughter, Isabella, made her runway debut at the Sherri Hill fashion show this past weekend. Isabella had the support of her father along with other family friends.

Sherri Hill specializes in dresses the set trends. The brand prides itself on creating apparel that can be worn in various settings because of the level of comfort the designs provide. According to the company’s website,

“Sherri’s devotion to design is evident in her selection of beautiful fabrics and trimmings combined with innovative combinations of cuts to accentuate the best features of each and every woman.”

Michael Strahan beamed as 17-year-old Isabella walked the runway at the Sherri Hill fashion show this past weekend. “Very proud of you, @isabellastrahan, for crushing your first runway this weekend for @sherrihill,” the celebrity father wrote online after the event. “As a parent, there is nothing like watching your child succeed at what they love with a smile on their face,” Strahan continued. “#ProudDad #GirlDad.”

Isabella and her twin sister, Sophia, are Michael Strahan’s kids with his ex-wife, Jean Muggli. Strahan also has older children, Tanita and Michael Jr., from his marriage to Wanda Hutchins. Michael Strahan opened up about the joys and challenges of fatherhood during a 2016 interview with Esquire.

“I’ll tell you, those first three years, they are tough,” Strahan admitted. “One poops and the other one doesn’t. One is hungry and the other one isn’t. But then, getting them on schedule … wow,” the television personality explained. “That was the big thing,” Michael added. “But that wasn’t until they were about 3. Then you got a whole bunch of other things going on.”

Sophie and Isabella will soon graduate from high school and be off to college. Michael older children will continue to build the lives they desire. Meanwhile, Strahan will remain a dedicated and proud father.

“There is so much I am thankful for,” Strahan told his social media fans last November. “There is nothing I am more thankful for than the honor of being a father to this group,” the television personality said of his kids. “My TEAM for LIFE!”

RIHANNA PUTS HER FASHION-FORWARD MATERNITY STYLE ON DISPLAY IN 'VOGUE'