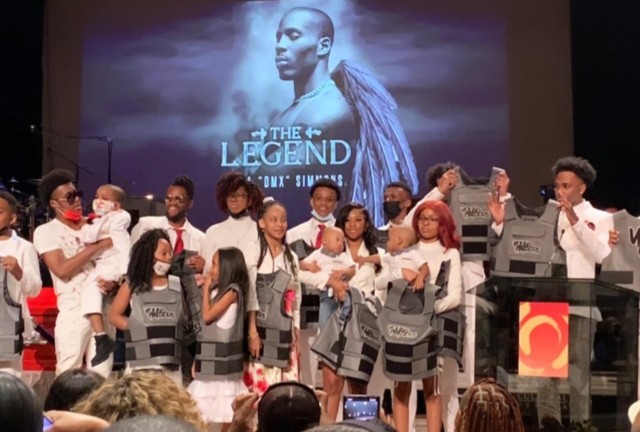 The battle of  DMX’s estate continues as another person has come forward claiming to be the child of the late legendary rapper-bringing the total of children he allegedly fathered to 16.

RELATED: HOW MANY KIDS DID DMX HAVE? NAMES, AGES, AND MOTHERS REVEALED

On Friday, a judge  appointed DMX’s three sons Xavier, Tacoma, and Sean Simmons from his previous marriage to Tashera Simmons as the temporary administrators of the estate of their late father.

DMX’s fiancée Desiree Lindstrom, who is the mother to his 5-year-old son Exodus, had also petitioned the court to be an administrator of his estate (estimated to be worth around $1 million) as had the late rapper’s older daughters, Sasha Simmons, and Jada Oden.

“The next big thing is to determine who are the rightful heirs. The estate is going to ask everyone to prove paternity through DNA testing. All the legal children of DMX will be entitled to an equal share of his estate,” Herbert Nass, the trusts and and estates attorney for Xavier, Tacoma and Sean Simmons, said on Friday.

He left behind 15 children, four of whom was with his ex-wife Tashera Simmons. Their names are: Xavier, Tacoma, Praise Mary Ella, and Sean. DMX and fiancé Desiree Lindstrom had only one child together.  DMX proposed to Lindstrom at their son’s third birthday party. In an Instagram post last year, she praised DMX for being a great dad.

“Their bond and love is all I could of wanted out of my life as being a mother… thank u God for such a blessing for sending me a wonderful man that is a wonderful father to our son.”

YOU ARE THE FATHER! COURT DETERMINES BOW WOW IS FATHER OF OLIVIA SKY'S SON

YOU ARE THE FATHER! COURT DETERMINES BOW WOW IS FATHER OF OLIVIA SKY'S SON