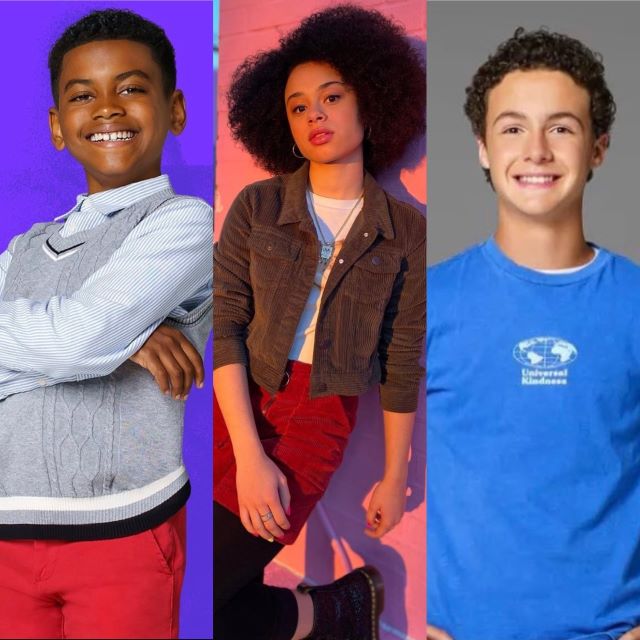 That Girl Lay Lay is destined to become a true Nickelodeon hit. Stars Gabrielle Nevaeh Green, Peyton Perrine III and Caleb Brown weigh-in on their new show, exclusively with BCKOnline. Take a look below at what the stars had to say to us about their characters on the show and a little bit more.

Make sure to tune-in tonight at 7:30 ET/PT to That Girl Lay Lay, This is one series premiere that you don’t want to miss!

But, before the stars of the show weigh-in on their particular characters, if you haven’t heard about this upcoming series, here’s a brief synopsis of the show below.

The new series will follow Lay Lay, an avatar from a personal affirmation app that magically comes to life, and her best friend Sadie, portrayed by Gabrielle Nevaeh Green, as they navigate life as teenagers and discover who they truly are. In the premier episode, Sadie wishes upon a star that her hype-girl avatar, Lay Lay, were real, causing Lay Lay to magically come to life. Now that she is in the real world with Sadie, Lay Lay decides that she wants a teenage experience herself and enrolls in the local school. Using her innate charm, Lay Lay convinces Sadie that she needs to come out of her shell and the best way for her to stand out is to run for student council.

BCKONLINE: Can you tell us a little bit about your character?

Gabrielle Nevaeh Green: I play Sadie on That Girl Lay Lay. She’s a bit of a wallflower. She doesn’t like to be the center of attention. She doesn’t like speaking to people, public speaking really makes her anxious, and gives her a lot of anxiety. That’s where Lay Lay comes in. Lay Lay is her positive affirmation app that boosts your confidence and gives her all the positivity that she needs throughout the day to conquer whatever tasks she’s handling at the moment. And of course, one night, Sadie has a really bad day at school, she wishes that Lay Lay could become a real person. She wishes to have that positivity and that love and that encouragement all the time. And of course, through Nickelodeon magic, Lay Lay becomes real and they have the best time together.

BCKONLINE: What would you want viewers to take away from the show?

Gabrielle Nevaeh Green: I really want viewers to take away that it’s okay, if you’re not that person that’s confident all the time, that really huge personality or that big extrovert. You can still make your mark in the world without being everything that other people want you to be. It’s okay not to be at the forefront all the time or not to be the center of attention or the person that’s always going to be in the front lines. It’s okay to just be in the back sometimes and make your mark that way.

BCKONLINE: Would you say that you are different or a like the character that you play?

Gabrielle Nevaeh Green: I’m so different from Sadie. The opposite, we’re polar opposites. And that was really difficult for me at first because Sadie, throughout the first few episodes, she’s really insecure, she’s really shy, and she doesn’t like to talk to people. But, I love talking to people. I love performing and things like that. So, that was something that I had to adjust myself with. Because at first, I was playing the character way too confident. And I had to dial it back, a lot. But that’s really how we’re different. But we’re both similar, because we all have those awkward moments. We’re both insecure sometimes. And that’s just life that’s just being human. So, I think that’s what people are gonna really relate to relate to with this character on September 23.

A post shared by Peyton Perrine III or P3 (@peytonperrine)

BCKONLINE: Peyton, can you tell us a little bit about your character on That Girl Lay Lay?

Peyton Perrine III: My character’s name is Marky Alexander. He’s Sadie’s younger brother. And he will do anything to get money. I mean, literally anything. He ropes in Jeremy and the family to help in his business.

BCKONLINE: Would you say that you are kind of like Marky or a little different?

Peyton Perrine III: I’m not that much like Marky, but we do have one thing in common and that is we both love money. I mean, I don’t like it, I love it. Where we’re different is that Marky can’t do any sports. I do Muay Thai and he doesn’t.

BCKONLINE: Caleb, can you tell us a little bit about your character on That Girl Lay Lay?

Caleb Brown: I play Jeremy Miller. He is the oddball out of the group. I’d say he’s not the coolest kid at school. He’s very aware that he’s not the coolest kid at school. He is mostly focused on what makes him happy other than fitting in with everybody else. He is Sadie’s best friend from childhood, he calls himself her ride or die, and he’ll just go through anything for his friends. He’s a go with the flow kind of guy, so he gets dragged into some crazy stuff over the season.

BCKONLINE: What do you think you will bring to the character?

Caleb Brown: I think the easiest part about playing Jeremy is I am very similar to him. I was never the cool guy. I was the oddball. I was kind of the one that nobody paid the most attention to. And I feel like if I’m able to take my own characteristics and me and put him into Jeremy, and try and make the character in the show as funny as I possibly can, I think I think we’re in for a good ride.

Are you excited as we are to see these talented teens in action? Tune-in tonight at 7:30 pm ET/PT and catch these three and the entire cast on Nickelodeon’s That Girl Lay Lay!