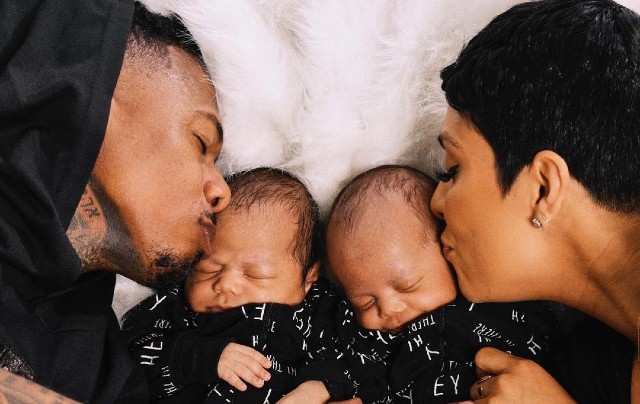 Nick Cannon and Abby De La Rosa celebrated their twins turning one month with a sweet photoshoot. “One month old Zion and Zillion Cannon,” Abby captioned under a series of photos.

In the snaps, Nick and Abby can be seen posing next to their kids, who are peacefully sleeping in their Gerber onesies.

Cannon and De La Rosa welcomed twin sons, Zion Mixolydian and Zillion Heir, on June 14. De La Rosa previously announced on Instagram that she was pregnant with twin boys, writing, “Our dearest sons – my miracle babies, Thank you for choosing me to be your Mommy.”

“I pray that God gives you both the strength to walk brave and boldly in your individual truth just like your Daddy. That God bless you and your brother and guide you into living out your full purpose,” she wrote at the time.
https://www.instagram.com/p/CQMu4X7p-eR/
On June 23,  nine days  after welcoming twins with Abby, Cannon and model Alyssa Scott welcomed a son named Zen Cannon. Additionally, The Masked Singer host welcomed daughter Powerful Queen in December with Brittany Bell, with whom he also shares 4-year-old son Golden “Sagon.” He also shares 10-year-old twins, son Moroccan and daughter Monroe, with ex-wife Mariah Carey.
https://www.instagram.com/p/CRX6wsxpTu2/

In all, Nick Cannon has fathered seven kids with four born in the last year. Earlier this month, Cannon revealed in a conversation with The City Girls that he is “having these kids on purpose”.

“I don’t have no accident,” said Cannon after City Girls rapper JT advised him to “wrap it up”.

“Trust me there’s a lot of people that I could’ve gotten pregnant that I didn’t,” Cannon continued. “The ones that got pregnant are the ones that were supposed to get pregnant.”

Adding, “I’m like a seahorse out here. That’s just the way I’m procreating.”

BABYFACE'S DAUGHTER, PEYTON EDMONDS, CAN SING LIKE HER DADDY!