Home » NEWS » SUMMER WALKER CELEBRATES AT HER BABY SHOWER: ‘IT WAS BEAUTIFUL’

SUMMER WALKER CELEBRATES AT HER BABY SHOWER: ‘IT WAS BEAUTIFUL’

"Such A Great Time" 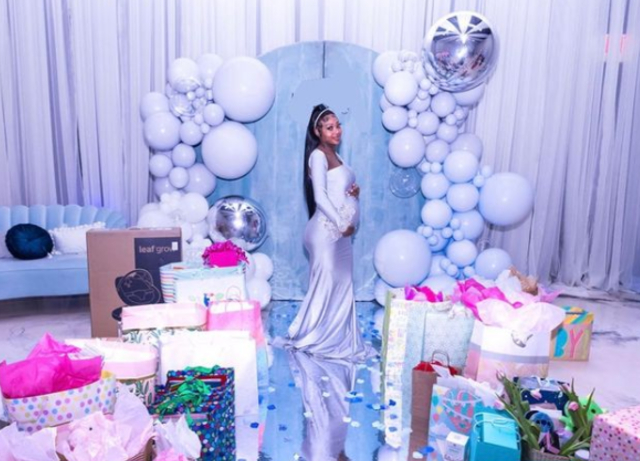 Summer Walker enjoyed a baby shower filled with love and decorations earlier this week. The recording artist took to Instagram after the festivities concluded to thank all who made the occasion grand.

“I would like to thank everyone who contributed to making my baby shower a very special moment,” Summer shared after her party ended. “It was beautiful and everyone had such a great time,” Walker said.

Partying With Love assisted Summer with preparations for her bash. Peaches and Pine supplied balloons for the event. Helen Florals provided beautiful flowers that added to the atmosphere at Summer’s baby shower. Sweet Creations By B was the mastermind behind the incredible cake.

Summer’s expectancy already has her fans guessing the gender of her unborn child. Some believe the celebrity is expecting a girl because of the size and position of her bump. Others think the recording artist is having a boy. “You’re having a girl,” one fan declared after seeing a recent candid of Walker cradling her bump while marketing new merchandise. Several agreed with the social media follower.

News of Summer Walker expecting a child with London on da Track spread last year. Some did not immediately believe Summer and London were having a baby but were more than convinced after the celebrities confirmed the speculation.

Summer is recognized as a wonderful songwriter and singer in the music industry. The celebrity recently shared how music has impacted her life during a recent interview with American Songwriter.

“It has always been in my life,” Walker said of music. “My mom used to play old school music all the time when I was growing up – it was everywhere,” the recording artist shared. “That’s when I fell in love with how music made me feel,” Summer continued. “I connected to it deeply from a very early age. Just hearing music throughout my childhood just spoke to me.”

Summer Walker is expecting her first child to arrive in the coming weeks. The little one will make London on da Track a father of three kids.

NORTH WEST IS 'VERY PARTICULAR' ABOUT HER HAIR

NORTH WEST IS 'VERY PARTICULAR' ABOUT HER HAIR