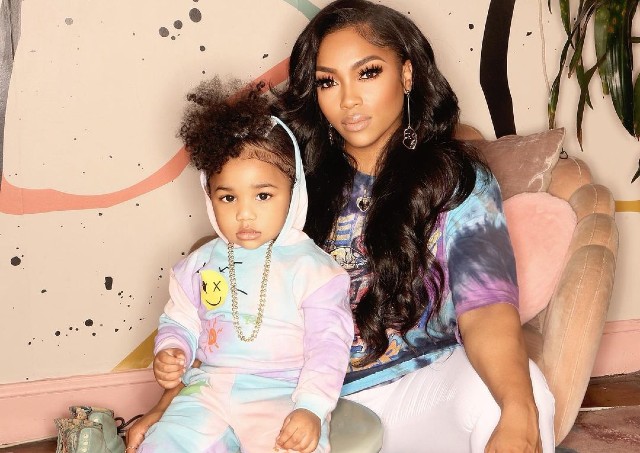 Brooke Valentine and her daughter, Chi Summer, are back again with a Fashion Nova look. The mom-daughter pair were recently photographed wearing tie-dye outfits from the popular brand in honor of “Tie Dye Tuesday”.

“@chisummerblack look like she bout to drop a EP,” Brooke commented under the photo.

Brooke , who is a mom of two, recently opened up about wanting more kids despite have two difficult pregnancies.

“My pregnancies with London versus Chi, they were both high risk for different reasons,” she recently revealed during an interview with VH!.

“I would say with both pregnancies it was kind of like sit down, stay calm, eat right, be stress-free. So I had to shut down with both of my kids,” she continued. “Then I experienced postpartum hemorrhage with both of my kids. I ended up being in the hospital myself a whole month after having the baby recovering.”

During the interview, Brooke also shared some tidbits about her daughter. “That girl is solid muscle,” Brooke revealed. “Everybody sees her coming in, she’s kind of [a] short little thing,” Valentine shared. “When you try to pick her up, it’s like, ‘Woah!’ She is solid and she knows it.”

Chi Summer is Brooke Valentine and husband Marcus Black’s only child. The celebrity mom also has son London from a previous relationship.

TYRESE AND WIFE SAMANTHA TO DIVORCE AND REMAIN 'STONG CO-PARENTS'

TYRESE AND WIFE SAMANTHA TO DIVORCE AND REMAIN 'STONG CO-PARENTS'